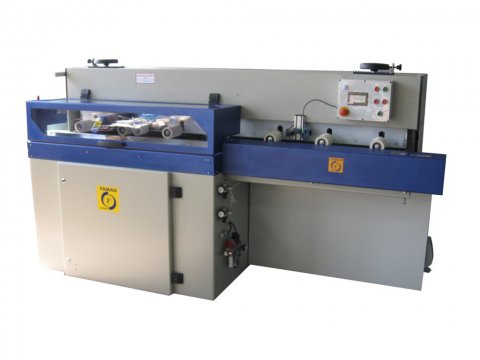 DPTW device is used to cut defects out (preparation of the raw material for the joining with micro-dovetails) in wooden slats in the areas marked with fluorescent chalk, read out by the luminescent scanner (of the SICK company) and for cutting elements on the desired dimension set on the control panel. The importance of areas of lath to cut out is done manually by selecting persons. The material is being transported through the roller conveyor on toothed belt conveyor (of the world leader in the production of belts - of the BRECO company) in the area to be cut. After cutting, the material is transported to the receiving device (rotary table, belt conveyor) also through the toothed belt. During transport, the material is pressed against to the belts through the actuator assembly - which eliminates the occurrence of slippage during transport. The drive of transporting belts is being made through the precise and fast servo (of the MITSUBISHI company) that allows to obtain the exact cutting to size. Ower whole watches the quick driver of the MITSUBISHI company. Control and all settings are conducted from the touch panel of the operator. The application of noise insulation system in the device and a special saw provides the low level of the emitted noise what is the most important advantage to this type of device.